The January Miller’s Tale should be dropping onto your doormat very soon, thanks to the efforts of Carole Mollon who eventually managed to tame the rogue printer that seemed determined to push our January issue into February. She and her husband Richard then gamely collated, folded and stapled the 400 copies by hand, a job normally done by the printing machine.

If you’re an NMDCA follower who doesn’t live on the estate and won’t be getting your copy delivered, you can still read the Miller’s Tale at https://nmdca.files.wordpress.com/2020/01/newsletter-a3-form-jan-20-for-web.pdf

This quarter we have put a couple of flyers inside the newsletter to encourage you to join us for a Gin night hosted by the Hiltingbury Still in the Community Hall. Following what I’m sure will be an informative and interesting presentation by Clio of the Hiltingbury Still there will be opportunities to sample the Gins and some nibbles then rack your brains with a slightly alcohol related quiz to finish off the evening.

There is also a flyer inviting you to a special evening at the Hiltonbury Farmhouse to meet a local author. After he takes you through the evidence, can you come up with a verdict on a cold murder case whilst enjoying a two course meal and a glass of wine?

Go to https://nmdca.wordpress.com/events-coming-soon/ for more details about these two upcoming events. 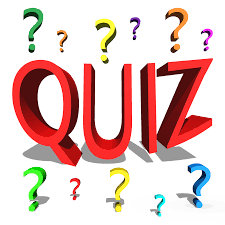 10 teams contested the quiz night with the room full, and no space for any more teams.

It was particularly pleasing for me as the quizmaster and for the NMDCA committee as we attracted some regular players, some participants who for various reasons have not been able to come for a while, and some new teams which is always welcome.

Thanks also to all of the participants who came, a couple of whom donated to the raffle, which was very generous, but for buying so many raffle tickets. We actually ran out of tickets. That reflected the general atmosphere of the night, which was good humoured throughout, and a entertaining time appeared to be had by all. It was a pleasure hosting the event.

There was some good humoured banter throughout the quiz, One gentleman from the Quidditch team clearly did not know  the power of his own voice, and said rather louder than he expected two answers, which were both correct, including one which he clearly did not expect to be right. On another team there was clearly some internal disagreement about an answer, and a gentleman was told quite clearly that he could expect a slap when he got home.

The quiz itself started with a round where the answers all had UK place names in them. I thought that was quite a gentle opening but it proved more difficult than I thought. Not as difficult as the music round, which featured singer’s backing groups or bands.  We had scores ranging from 1 to 16 out of 20 for that round, so as you can imagine there was a variety of reactions to that.

We for the first time introduced a spot prize. In this round teams had to guess how old the author John le Carre was, as it was his birthday on that day ( 88). There was a tie for that with two teams both guessing 87 . One day earlier and they would have been exactly right.

Question of the night which flummoxed the teams was the name of the railway bridge that separates South Millers Dale to Valley Park. The walking group which were represented there had walked over that bridge on a recent walk but had not realised it had a name. It is actually for those who do not know is the Reverend W.H Awdry bridge (of Thomas the Tank Engine fame)

In terms of the scoring of the quiz, it was remarkably close, and was not affected by the wide discrepancy of the music round. At the beginning of the last round, only four points (two correct answers) separated the top 5 teams, which was very gratifying as it shows the balance of the quiz is roughly right.  The Quidditch team and the Quiz Packham team both scored 137 points on the night (out of a possible 180) but the Girls Allowed Out team stole it on the line with 139 points, which meant that they won by one correct answer. I was rather pleased that there was a clear winner, as I would have struggled at the last moment to have sorted out a tie break question! 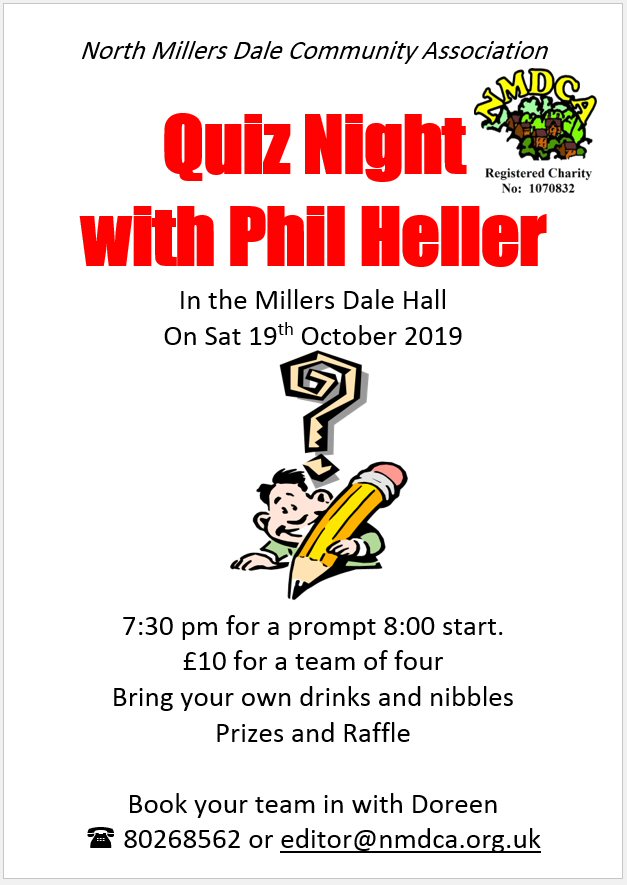 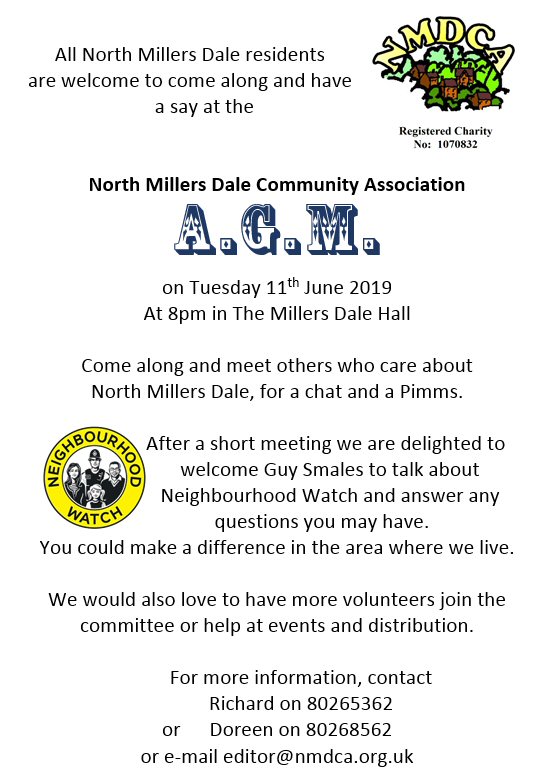 The community association has just received the following notification from Jane Dyke of Yellow Dot.

‘Just to let you know that we are having a few changes at the Millers Dale Hall.

The Group office is manned 8-6pm, 51 weeks of the year. Recently party users have complained that they can’t get to us by 4pm to collect keys etc.

We will also be increasing the Hall fees to £9 an hour from January 2016 in line with other facilities in the area. (Unchanged since 2008)’

On Saturday night 14th November a group of residents and a few visitors had a great evening pitting their general knowledge against the fiendish inquizitor Phil Heller. A good mix of young and old meant that only a few of the questions went unanswered despite a lot of head scratching. This time Phil tried out a variation on his usual style of music section. Despite his prediction there were one or two teams that came up with very strong scores. At the end of the evening two teams had drawn so a tie breaker had to be employed to sort out the eventual winners. 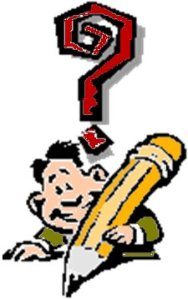 Bring your own drinks and nibbles

NMDCA
Create a free website or blog at WordPress.com.